The accumulated dose inside a human phantom as measured
by the MTR-2B Mathroshka experiment inside the International
Space Station from 18 October 2007 until 18 March 2009.


The service “Human Spaceflight: Cumulative crew radiation exposure” aims to provide an estimate of the past radiation dose accumulated by a person in space. Radiation environments considered include Earth’s radiation belts, galactic cosmic rays, and solar energetic particles. This service is made possible by maintaining accurate records of local area radiation fluxes combined with spacecraft and human phantom shielding geometry models and onboard passive or active dosimeter data (e.g. thermoluminescent dosimeters [TLDs], tissue equivalent proportional counters [TEPCs]). The service is intended for personnel involved in providing Post Event Analysis with the reconstruction of the space particle radiation environment at a given time and location to allow the accurate evaluation of doses inside human bodies.

This service is implemented through a combination of products and tools which can be found through the following tabs along with expert support provided by the teams constituting the ESA Space Weather Service Network. Should you require further guidance in the use of this service, or have specific questions about any aspects of the service presented here, don’t hesitate to contact the Helpdesk.

A number of models and in-orbit sensor datasets are provided with the help of products and tools such as: 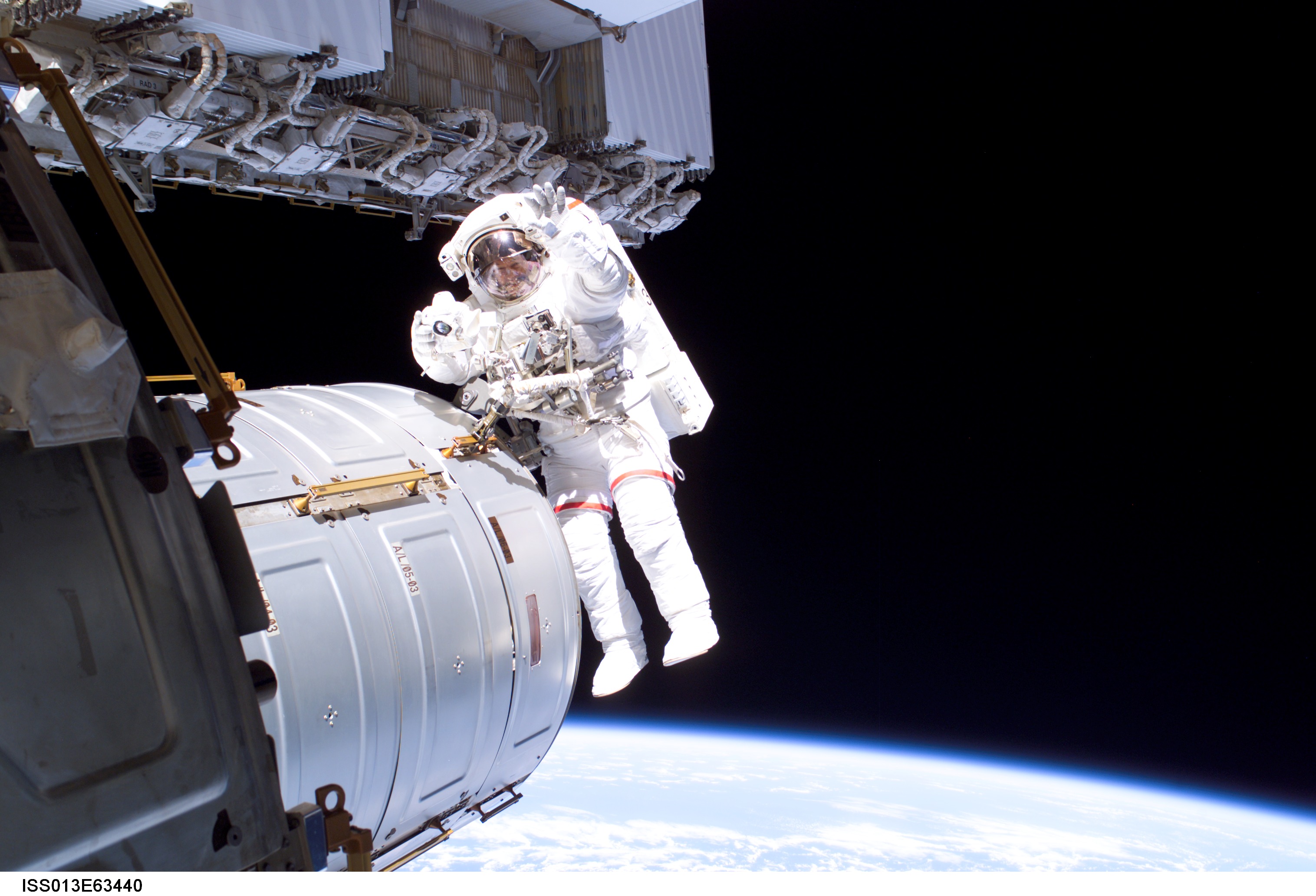 An astronaut on a spacewalk outside the ISS (© ESA)

Particle radiation is considered the main hazard for human spaceflight, specifically when considering a potential return trip to the Moon or interplanetary travel in general. However, even at Low Earth Orbit (LEO) like the International Space Station, particle radiation poses a risk. Information is thus needed to evaluate the possible health effects of space particle radiation on humans on short-and long-term space missions. This includes space environment data (e.g. particle radiation, solar X-ray and UV observations) and dose measurements.

The RadSpace products provide information on the radiation environment at the International Space Station (ISS) which can be harmful to the health of the ISS crewmembers. The data from the DOSIS and DOSIS 3D projects map the radiation environment inside the Columbus Laboratory based on passive and active radiation detectors. The results from the three MATROSHKA campaigns provide the depth dose distribution inside an anthropomorphic phantom using passive dosimeters.

Energetic particle flux measurements (electrons, protons and helium) from the Energetic Particle Telescope (EPT) on board PROBA-V at LEO can be accessed from the Products tab. A number of other particle radiation measurements are available through the Space Environment Data System (SEDAT) as well. Note that the particle fluxes need to be properly propagated through the Earth's magnetosphere if the user is interested in knowing the flux at a different altitude other than where the measurements were taken.

Measurements and detection of solar flares and coronal mass ejections are provided by the Solar Influences Data Analysis Center (SIDC) and the Kanzelhöhe Observatory (KSO). Archives of geomagnetic indices are available from the Tromsø Geophysical Observatory (TGO), the German Research Centre for Geosciences (GFZ) and SEDAT. A large set of measurements can also be accessed through the Space Weather Data Browsing and Analysis (SWE Data) web interface.

In order to study the specific radiation environment near and inside a spacecraft, a tool such as the Space Environment Information System (SPENVIS) could be used. This tool allows the execution of a set of space environment models based on a mission scenario (mission duration, typical spacecraft trajectories and spacecraft attitude) and to evaluate impacts and risks by propagating the results into engineering models. The tool includes graphical visualisation and an extended help with background information and references to the European standards. For a more comprehensive analysis of the space environment effects, the SPENVIS output could be exported to more specific applications, such as GRAS (Geant4 Radiation Analysis for Space) or SPIS (Spacecraft Plasma Interaction Software), that are taking into account the detailed geometry of the spacecraft.

This section provides links to web pages or resources that are not part of the ESA Space Weather Service Network or esa.int domain.  These sites are not under ESA control, and therefore ESA is not responsible for any of the information or links that you may find there.