This page presents the work performed on the DENSER project.

One of the driving principles of DENSER was to demonstrate the relative ease of sharing certain key aspects of ML-enabled time series predictors across different products from different space weather domains.

This activity started with a literature study that has been performed by domain experts from the Royal Belgian Institute for Space Aeronomy (BIRA-IASB) and the Finnish Meteorological Institute (FMI), both embedded in their respective Expert Service Centres (ESCs) Space Radiation (R-ESC) and Geomagnetic Conditions (G-ESC), started within the Space Situational Awareness (SSA) programme of ESA.

In a second phase of this study, a comprehensive list of products for which ML might provide significant advantages – compared to the classical approaches of (physical) model design - has been composed and elaborated upon with respect to potential costs and benefits.

The DENSER project team has developed two products in this project, one from each of the two domains, namely proton flux prediction (guided by Space Radiation experts at BIRA-IASB) and geomagnetic activity (guided by Geomagnetic Conditions experts at FMI), and similar ML techniques have been applied.

Finally, the lessons learnt during the study and development phase were summarised in a document on recommendations and a roadmap (see 'roadmap' tab for a summarising list). 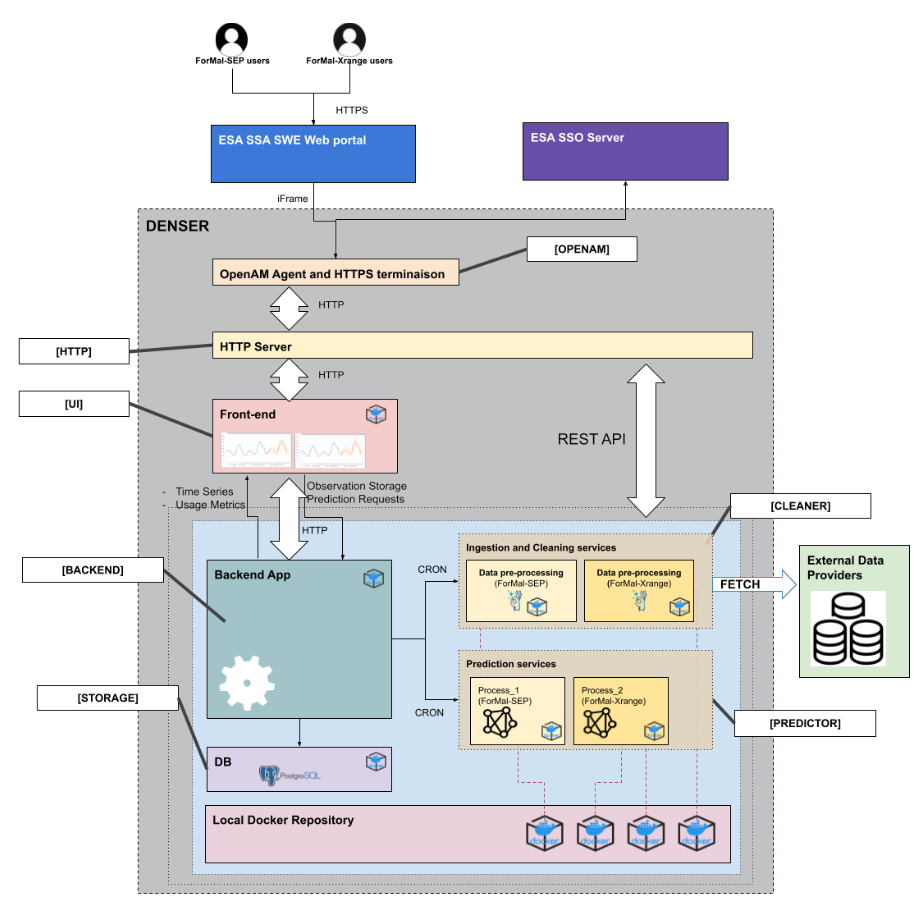 A design driver for this architecture was to make it generic when possible and to specialize sub-components only when needed.

All major building components of the architecture are dockerized and they are orchestrated with docker-compose. In the context of the DENSER project, the complete architecture was instantiated on a high-performance server at the premises of Space Applications Services.

Four different models have been considered and implemented.

Finally the Recurrent Neural Network (RNN) based on LSTM (Long Short-Term Memory) architecture has been selected for the advanced validation.

The RNN Model is a recurrent model. It means that it can learn to use a long history of inputs, if it is relevant to the predictions the model is making. The model accumulates a series of timesteps, and makes a prediction of a series of future timesteps. This model can be parametrized with a number of lstm units. Adding too many lstm units can make the model overfit more quickly.

The available (pre-processed) input data is, for ML activities, used for three purposes:

Model building and model training is performed in Jupyter notebooks, instantiated in GPU-enabled Docker containers (one per DENSER product) that are based on a single Docker image.

The figure hereafter presents the training environment for the DENSER models: 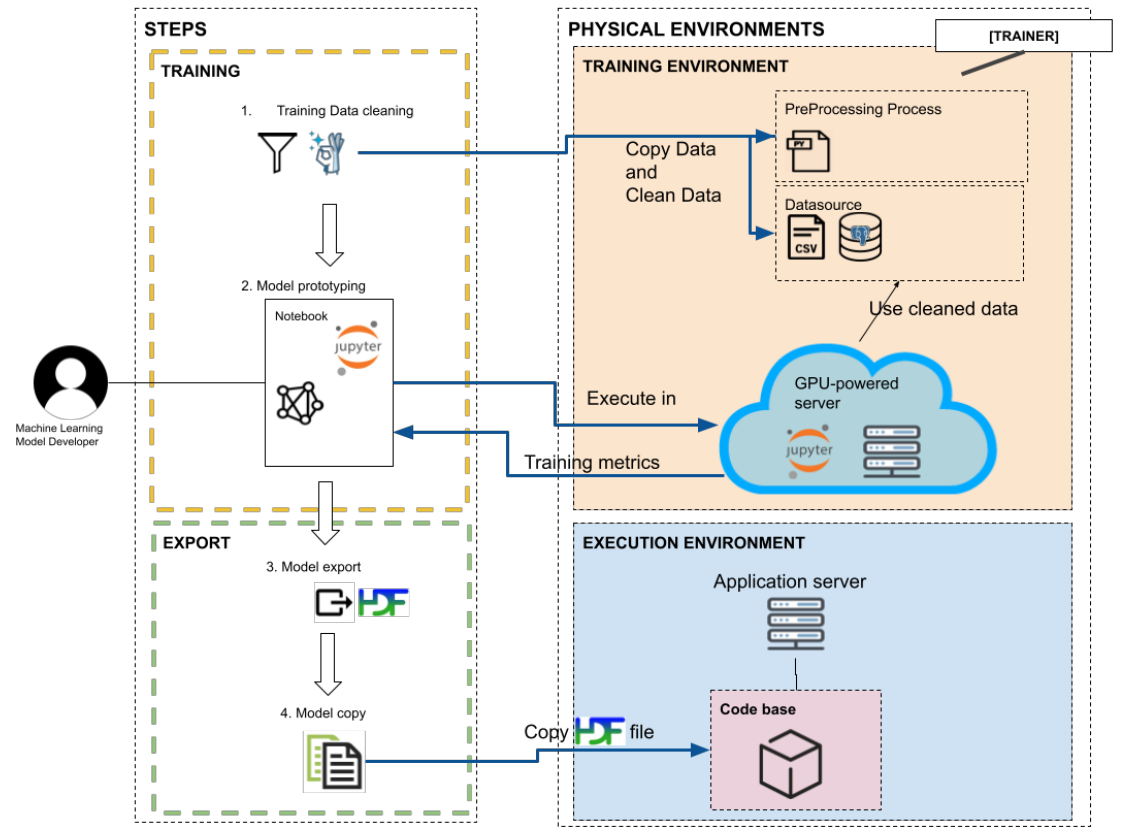 This allows for quick development as blocks of python code can be (re)evaluated without needing to evaluate a larger codebase each time a change is made. This caters well to the highly iterative process of ML model development. In addition, Jupyter combines live code, visualizations and explanatory texts in a single entity, further inviting and facilitating ML- based experimentation and, afterwards, documentation.

Code that is shared between the various notebooks are put into separate python files and are imported in the various notebooks. Also the final trained models are handled this way. Given the pre-processed input data, initial feature engineering activities whereof it is suspected that these activities might be beneficial for all ML models, has been performed. Using the resulting set of features of data points, the ML model development process has started with implementation of the purged walk forward cross validation data splitting mechanism, allowing a model to draw from the resulting sets of training/validation and testing data.

The application provides a specific interface for each product that takes into consideration the specificity of the products.

orecasts can be browsed using the calendar. Then a viewport displays the prediction, and possibly the measurements in cast of a past prediction.

Markers provide hints such as the storm levels, or the different horizons.

The figures hereunder presents the DENSER interface for both ForMaL-SEP and ForMaL-Xrange products: 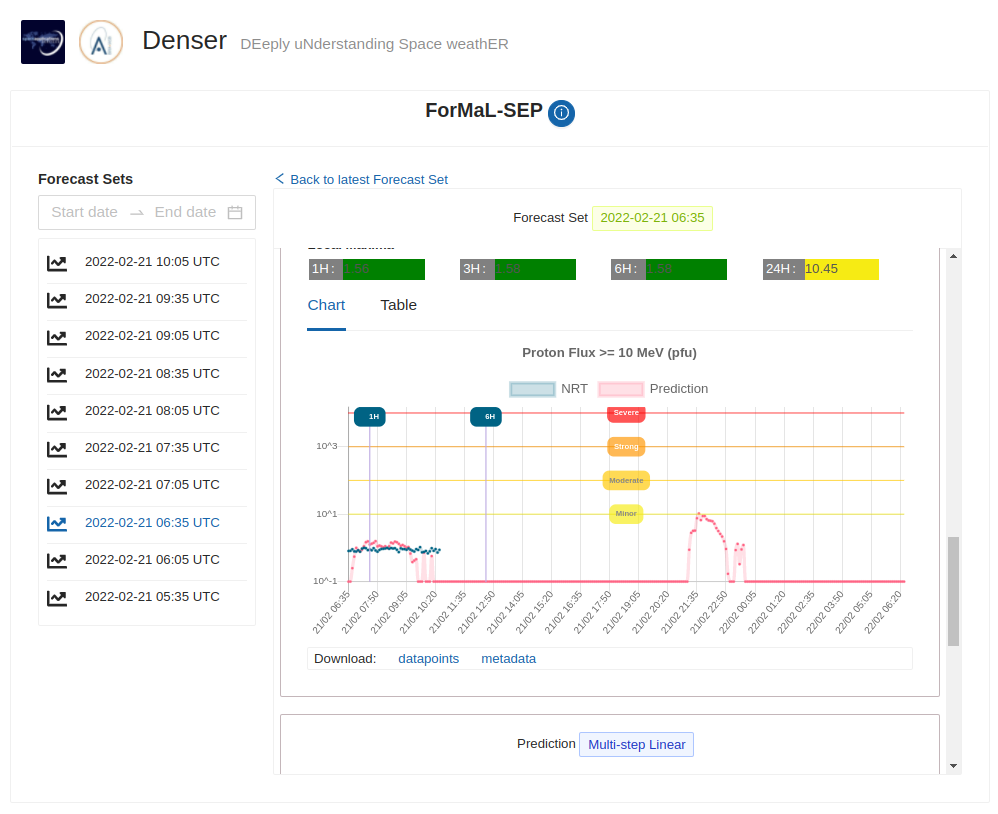 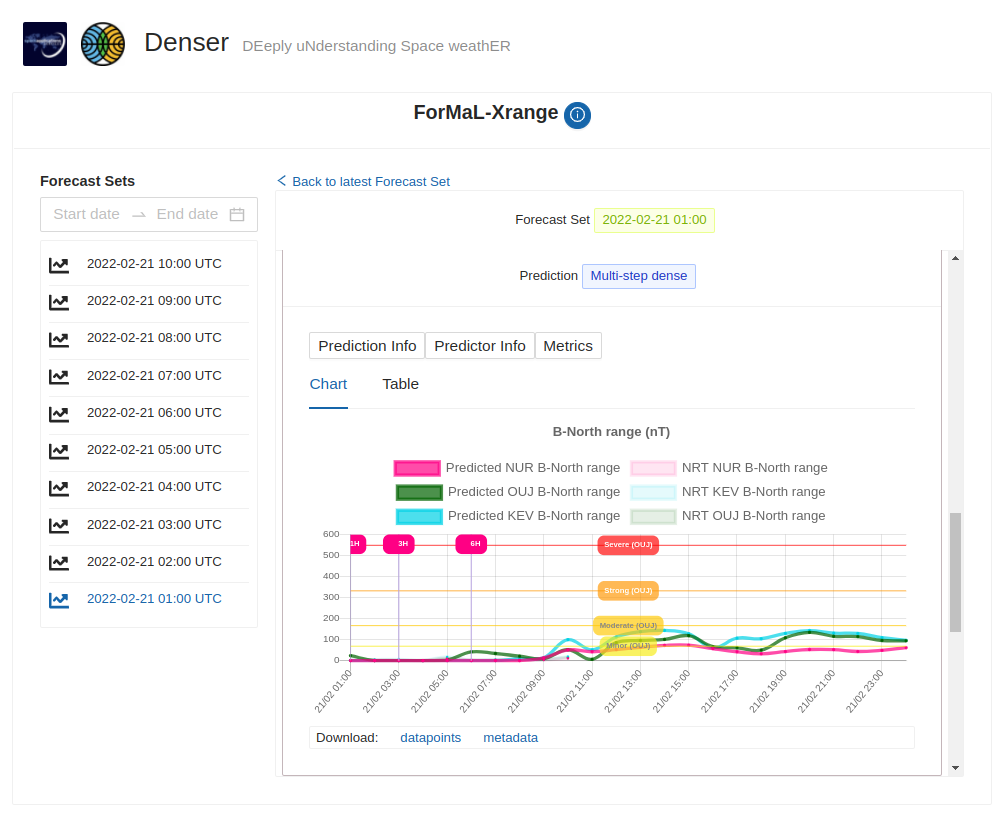 The validation of the two products has been an essential part of the DENSER project.

The main conclusion from the validation activities is that ForMaL-SEP has a good POD (Probability of detection) and AWT (Average warning time) compared with other models, but at the cost of a very high FAR (False alarm ratio). The model also shows a tendency to underpredict the expected maximal value on shorter time scales and overpredict for longer prediction horizons. While looking at the behaviour of the predictions during individual events, it was observed that for gradual events (flare location not magnetically connected to Earth) first a positive prediction is issued, then the predicted event length decreases since the eruption is not immediately followed by an increase in proton flux, but once they start rising the predicted event length increases again. The validation report that has been written for this task also lists several other issues at the model level. One of the main issues is the large class imbalance between the active and quiet periods. From the results provided by a first basic validation activity, some changes were applied to the model training in order to try to fix issues with respect to the background subtraction of the input data taken with different instruments, the response to flat, rising and decaying inputs. The number of solutions have been identified to improve the validation results. However, the output did not meet the expectations. Therefore, further work is needed in future to determine additional validation methods.

The validation of the ForMaL-Xrange product used historical data collected during the years 1998-2018 and is based on a selection of 21 events of strong geomagnetic activity (Kp>8).

The main conclusion from the event-based validation is that during strong geomagnetic storms 1H forecasts by ForMaL-Xrange do not catch the peak values in magnetic field north component variations, but they show good performance in estimating the different activity levels (minor, moderate, strong, severe). This conclusion does not depend significantly on the location of the stations at the storm starting time. Comparison between the 1H forecasts by the AurorasNow! service and the ForMaL-Xrange forecasts show that the latter are in RMSE-sense better than the statistical forecast based on 5, 50 and 95 percentiles used in Auroras Now. Aurora enthusiasts today use the 95 percentiles by AurorasNow! in their decision-making. If that value is in the category of strong or severe activity, then the chances to get nice auroral photos is better than in average conditions. Our conclusion is that adding 1H forecasts by ForMaL-Xrange to the tables presented in AurorasNow! would improve the accuracy of the service.

Validation details are documented in the DENSER Validation Report.

The overall DENSER project has led to define a list of recommendations and possible future developments:

The short-term development tracks are the following:

As a long-term development, the validation work that has been conducted for Recurrent Neural Network could be expanded to cover also the other methods available in the presentation layer of current ForMaL-Xrange service. Naturally, if better forecasts will be achieved either with the more advanced neural network algorithms or other statistical/machine learning algorithms described above, they should be used in the next version of the web-service and their performance statistics should be reported there.

Contact the SWE Service Helpdesk at helpdesk.swe@ssa.esa.int to request more information about the ForMaL-SEP and ForMaL-Xrange products.